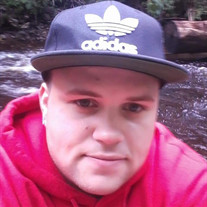 Charles E. Balasavage, Jr., 28, passed away on Thursday, March 7, 2019. Born November 15, 1990 in Wilkes-Barre he was the son of Charles E. and Joanne Shanahan Balasavage. Charlie had a kind and loving soul and truly wanted to help other people. His maternal grandparents, Joseph and Joan Shanahan, and a niece, Emily Hockenbury, preceded him in death. Charlie will be greatly missed by his parents; sisters, Brandi (Marcy) Balasavage and Allicia (Scott Hockenbury) Balasavage; nephew, Drake Hockenbury; paternal grandparents, Charles J. and Mary Balasavage; his Yorkie, Peanut; aunts, uncles, other family and friends. Celebration of Charlie's Life will be held on Monday, March 11, 2019 with visitation beginning at 6 PM followed by a memorial service and time of sharing at 8 PM at McLaughlin's, 142 South Washington Street in Wilkes-Barre. But We Knew Him As Charlie By Robert May, Director, ‘Kids For Cash’ A poem by Charles Edward Balasavage, Jr. (November 15th, 1990 – March 7th, 2019) “Life presents us with challenges that we must overcome. And sometimes all the detours can leave the senses numb. Life is filled with stumbling blocks we pass along the way. But it can become a stepping stone when love comes into play. Where ever there's an obstacle that we must rise above, it helps to overcome it with an attitude of love. For anger never solves a thing, and stress will bring us down. But love unlocks the doorway, where hope and faith are found. Life presents us with challenges that we must rise above. And blessed is he who can maintain an attitude of love.” I met Charlie in 2009 on the first day of our filming for Kids For Cash. I found Charlie to be a loveable kid who had very few material things but loved to go camping with his family and help his dad work on cars. When he was 14, his parents surprised him with a used red scooter. Charlie took great care of that scooter and rode it every day. But one day, the police came to Charlie’s door. He thought he was getting into trouble for riding it without a helmet but learned that it had been stolen. His parents unknowingly bought the stolen scooter. The police arrested Charlie and he entered the juvenile justice system. Like most kids, Charlie didn’t cope well and was moved from one correction center to another. In total, Charlie spent 5 years in the system and was subjected to 8 placements. Despite his time in the juvenile system, his love of poetry and family kept him optimistic about his future, which he felt was bright. He looked forward to college and working with computers. But confinement did not prepare Charlie for the real world. Like many other kids exposed to the juvenile system, if they weren’t using drugs prior to their ‘incarceration,’ many would be exposed to and begin using drugs during or after their experience. This was Charlie’s fate. But at 28 years old, Charlie was that same lovable kid who remained optimistic despite the increasing odds against him in a world where many looked down on him. Charlie never denied the challenges he faced and perhaps never fully appreciated that sharing his story saved lives and helped improve a broken system. I stayed in touch with Charlie and his family over the years. I knew him to be a caring individual who was at his family’s side throughout numerous challenges, including a horrific tragedy when his six-month-old niece died in a fire. As his mother told me; “He loved to help people, even in the darkest times of his addiction. Despite his constant struggle, he offered hope that people can change. While my son suffered from the debilitating disease of addiction, it did not define him. His addiction took his life, but addiction was no winner, as I believe that for every life it claims, sharing one personal story of addiction can save the lives of two others. Charlie found comfort in sharing the story of his life [Kids For Cash movie], and many have told me that his story truly helped them in ways I couldn’t have imagined. Now in his death, I know that Charlie would want this chapter of his story told, to help others, even if that help was limited to two.”

Charles E. Balasavage, Jr., 28, passed away on Thursday, March 7, 2019. Born November 15, 1990 in Wilkes-Barre he was the son of Charles E. and Joanne Shanahan Balasavage. Charlie had a kind and loving soul and truly wanted to help other people. His... View Obituary & Service Information

The family of Charles E. Balasavage Jr. created this Life Tributes page to make it easy to share your memories.