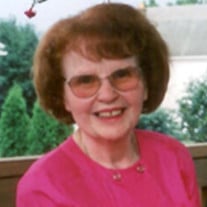 Catherine Theresa Loch, 91, of Kingston died Wednesday at Tiffany Court where she lived with her husband of sixty-eight years, Frank. Born October 3, 1918 in Wilkes-Barre she was a daughter of the late Edward and Catherine Maloney Durkin. Kitty was a graduate of G.A.R. Memorial High School and Wilkes-Barre Business College. She was employed in the Accounting Department of the Duplan Corporation for several years before exchanging vows with her husband, Frank in 1942, and was a secretarial employee in an office of the State of Texas during their residency in San Antonio while Frank was serving in the military at Fort Sam Houston. Catherine was a member of the Parish of Saint Ignatius Loyola and a charter member of the Parish of Saint Patrick in Wilkes-Barre. Her oldest son, Frank Loch, Jr. died in 2008. She was also preceded in death by her sister, Mildred in 1983, her mother, Catherine in 1973 and her father, Edward in 1919. Surviving, in addition to her husband are; sons, Edward of Wilkes-Barre, Father Richard of Scranton, John and his wife Joan of Wilkes-Barre and Alan and his wife Sheila of Lancaster; daughter-in-law, Nora of Reston, Virginia; grandchildren, Brian and his wife Caren Loch of Lovettsville, Virginia, Kevin Loch and Denise Jadud of Haymarket, Virginia, Lorrie and her husband Joseph Mercier of Reston, Virgina, Ryan Loch and Mecel Jorbina of Hoboken, New Jersey, Lauren Loch and Tyler Loch of Wilkes-Barre, Samuel, Noah, Emma and Olivia Loch of Lancaster; great-grandchildren, Daniel, Heather and Amanda Loch and Victoria Loch and Jonathan and Rachel Mercier; nieces and nephews. Celebration of Catherine’s Life will be held Saturday at 10:30 AM from McLaughlin's Family Funeral Service, 142 South Washington Street in Wilkes-Barre with Funeral Mass at 11:00 AM in Church of Saint Ignatius Loyola. Interment will be in Saint Mary's Cemetery in Hanover Township. Friends may call at McLaughlin's on Friday from 4 to 7 PM Memorial donations are preferred and may be made to Parish of Saint Ignatius Loyola, 339 North Maple Avenue, Kingston, PA 18704-3360, or American Red Cross, Wyoming Valley Chapter, 256 North Sherman Street, Wilkes-Barre, PA 18702-5316 in order to assist each with their relief efforts for Haiti.

Catherine Theresa Loch, 91, of Kingston died Wednesday at Tiffany Court where she lived with her husband of sixty-eight years, Frank. Born October 3, 1918 in Wilkes-Barre she was a daughter of the late Edward and Catherine Maloney Durkin.... View Obituary & Service Information

The family of Catherine 'Kitty' Loch created this Life Tributes page to make it easy to share your memories.