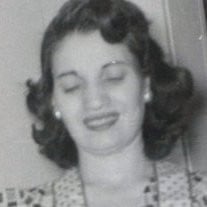 Catherine ‘Kay’ ‘Grammy Cupcakes’ Strobel, 91, a longtime resident of the Georgetown section of Wilkes-Barre Township, died Thursday at Timber Ridge Health Care Center. Born September 10, 1921 in Chicago, she was a daughter of the late Santo and Giuseppina Scavuzzo Dongarra. Kay was raised in the Bronx, New York where she graduated from Theodore Roosevelt High School. She had an exciting career working at F.A.O. Schwarz in New York City, where many of her clients were well-known celebrities and actors from the Golden Era of Hollywood. Kay met the love of her life, Harry Strobel, while vacationing in the Pocono Mountains. They were married on December 2, 1950, and settled in the Georgetown section of Wilkes-Barre Township. Kay was a devoted helpmate to her husband in running the family business, Evans-Strobel Plumbing and Heating A grand cook and baker, she brought diverse cuisine to her family and neighborhood. She was a big fan of opera and theater, and frequented the Pocono Playhouse and Broadway shows in New York City. She was an avid reader, fluent in Italian and a Sicilian dialect medal recipient. She inspired a sense of chic style in her family and friends. Kay was a former member of the Church of Our Lady of Mount Carmel in the Bronx, New York, and Saint Joseph's Monastery in Georgetown. Her husband, Harry Strobel, died February 24, 1987. Sisters, Anna Spinelli and Mildred Burdick, brothers, Joseph Dongarra, Ph.D. and Albert Dongarra, and sons-in-law, Gary Blakeslee and John McCafferty also preceded her in death. She will be greatly missed by her daughters, Lois and her husband Dr. Benjamin Fiester of Berwick, Leslie McCafferty of Dallas, and Diane Blakeslee of Georgetown; grandchildren, Wesley Blakeslee of Wilkes-Barre and Katie Blakeslee of Dallas; nieces, nephews, step-grandchildren and step-great grandchildren and other family members, most especially Jonathan Wint, who gave devoted care to Kay; and her dog, Peanut, the loving Pomeranian which gave her such joy. A very special thanks to Gloria Ermish for being a loving and generous friend to our mother. Many thanks to Dr. Robert Czwalina for his wise and tender care and to his wonderful staff. Special thanks to her dentist, and friend, Dr. Susan Ermish and her staff for their selfless support. Many thanks to Stanley O'Brien for his special care during our mother's last days. And to the unsung heroes of Timber Ridge Health Care Center, who filled our mother's last days with such love and support, beyond professional requirements, as she would have said: Mille Grazie. Celebration of Kay’s Life will be held Thursday at 8:30 AM from McLaughlin’s – The Family Funeral Service, 142 South Washington Street in Wilkes-Barre with Funeral Mass at 9:30 AM in the Church of Saint Mary of the Immaculate Conception. Interment will be in Mount Greenwood Cemetery in Trucksville. Visitation will be held at McLaughlin's on Wednesday from 5 to 8 PM Permanent messages and memories can be shared with Kay’s family at www.celebrateherlife.com

The family of Catherine 'Kay' Strobel created this Life Tributes page to make it easy to share your memories.