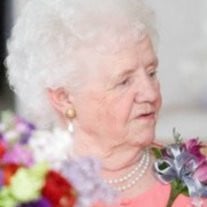 Catherine Mary Miller Lenahan, 89, formerly of Washington Square Apartments and South Wilkes-Barre died Friday in Indianapolis. Born August 10, 1923, in Plymouth, she was a daughter of the late Francis and Mary Farrell Miller. Catherine was a graduate of Saint Vincent’s High School in Plymouth. A former member of the Parish of Our Lady of Fatima, Catherine was a communicant at the Church of Saint Mary of the Immaculate Conception and previously was a member of St. Aloysius parish. Her husband, John ‘Jack’ Lenahan, died October 19, 1982. Her sisters, Irene Brown, Anne McNamara and Margaret Gingo and brothers, Joseph, Francis, Jr., Thomas and Eugene Miller also preceded her in death. Catherine was beloved by all her family and extended family. She will be greatly missed by her daughters, Patricia Kulesa of Linthicum, Maryland, and Kathleen and husband Robert Hopper of Indianapolis; grandchildren, Kevin (Amy) and Patrick (Kristen) Kulesa, Julie (Chris) Fuller and Douglas and Sean (Noelle) Hopper; great-grandchildren Benjamin, Ethan, Grace and Evlin; brother, Vincent Miller of Leesport; nieces, nephews, other family and friends. Celebration of Catherine’s Life will be held at 8:30 AM on Tuesday, July 23rd from McLaughlin’s – The Family Funeral Service, 142 South Washington Street in Wilkes-Barre with Funeral Mass at 9:30 AM in the Church of Saint Mary of the Immaculate Conception. Interment will be in Saint Mary's Cemetery in Hanover Township. Visitation will be held at McLaughlin’s on Monday, July 22nd from 6:30 to 8:30 PM. Memorial donations are preferred and may be made to Hooverwood Guild, 7001 Hoover Road, Indianapolis, Ind. Permanent messages and memories can be shared with Catherine’s family at www.celebrateherlife.com

The family of Catherine Mary Lenahan created this Life Tributes page to make it easy to share your memories.