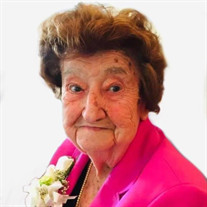 Catherine Dougherty Doyle, 92, a resident of Plains and longtime resident of the East End section of Wilkes-Barre, passed away peacefully on Tuesday, July 7, 2020. Born August 1, 1927 in Wilkes-Barre she was the daughter of the late Thomas and Margaret Munley Dougherty, who emigrated from County Mayo, Ireland. Catherine was a graduate of E.L. Meyers High School and worked for the Social Security Administration for twenty-five years, retiring as a supervisor. Catherine was a member of the Parish of Saints Peter and Paul, and a former longtime member of the old Parish of Holy Saviour and its Altar and Rosary Society. She was also a member of the Donegal Society and looked forward to her monthly card club games for nearly fifty years. Family was most important to Catherine. She and Joseph J. Doyle were married in the Church of Saint Patrick on June 25, 1949. Together they raised their family. Her husband died on February 18, 2008, daughter, Peggy, died on July 15, 2010, and grandson, Michael Daniel, died on February 25, 2012. Brothers, Thomas, Martin, and Charles Dougherty also preceded her in death. Catherine will be greatly missed by her children, Sheila Doyle of Plains, Patrick and his wife Maureen Doyle of Dallas, Nancy and her husband Joe Daniel of Wilkes-Barre, and Joseph and his wife Connie Doyle of Harvey's Lake; grandchildren, Patrick and his wife Colleen Doyle, Kevin and his wife Sarah Doyle, Katie Daniel, Shannon and her husband Nathan Tiedeken, Joseph Daniel, Brian and his wife Alex Doyle, Conor, TJ, and Ryan Doyle; great-grandchildren, Claire, Patrick, III and Brannon Doyle, Sadie, Hadley, and Ainsley Doyle, and Jameson, Christian, Declan and Emerson Tiedeken; nieces, nephews, other family and friends. Catherine's family will celebrate her life privately. Interment will be in Saint Mary's Cemetery. Memorial donations may be made to Saint Jude Children's Research Hospital. Memories and condolences may be shared with Catherine's family at www.celebateherlife.com Click this link to view additional details about Catherine's Services, including any available live streams: https://my.gather.app/remember/catherine-doyle

Catherine Dougherty Doyle, 92, a resident of Plains and longtime resident of the East End section of Wilkes-Barre, passed away peacefully on Tuesday, July 7, 2020. Born August 1, 1927 in Wilkes-Barre she was the daughter of the late Thomas... View Obituary & Service Information

The family of Catherine Dougherty Doyle created this Life Tributes page to make it easy to share your memories.

Catherine Dougherty Doyle, 92, a resident of Plains and longtime...