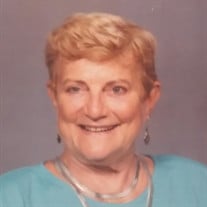 Catherine Collacott, 95, a longtime resident of Hagerstown, Maryland, died March 8, 2018 at Saint Luke’s Villa. Born March 15, 1922 in Wilkes Barre, she was a daughter of the late Richard and Honora Healey Horn. A graduate of Meyers High School, Class of 1940, and Wilkes-Barre Business College, she was a secretary for the AFL/CIO in Wilkes-Barre and the FBI in Philadelphia. She abandoned her blossoming career and returned to Wilkes-Barre to nurse her dying mother. Catherine then went on to have her own family, eventually relocating to Hagerstown, MD where she resided for the next forty years. She resumed her career, working in the credit department the Sears Store in Hagerstown, eventually retiring from there. After the death of her husband, Catherine returned to Wilkes-Barre to be near her surviving siblings. During her life Catherine was a member of St. Anne's Catholic Church in Hagerstown, the past president of the Holy Rosary Society of Holy Name Church in Swoyersville, and the Knights of Columbus Auxiliary. Catherine was an active member of the Democratic party and enjoyed traveling and spending time with her grandchildren. Catherine was a gifted story-teller and is best remembered by her children and grandchildren for her active imagination and keen sense of humor. Her husband of fifty-seven years, Eugene Collacott; sisters, Mary McGinty, Rita Wambold and Nancy McCormick; and brother, Richard Horn, preceded her in death. She will be greatly missed by daughters Honora Collacott, Molli Collacott, and Jeannie Collacott O'Meally; son-in-law Tim O'Meally; grandchildren; five great-grandchildren; many nieces, nephews, other family and friends. Catherine's entire family is grateful for the care provided by the healthcare professionals at Saint Luke's Villa. Celebration of Catherine's Life will begin on Monday, March 12th with visitation from 4 pm to 7 pm at McLaughlin's, 142 South Washington Street in Wilkes-Barre and continue there on Tuesday, March 13th with gathering at 8:30 AM followed by a Funeral Mass at 9:30 AM in the Church of Saint Mary of the Immaculate Conception. Interment will be in Saint Mary's Cemetery. Memories and condolences may be shared with Catherine's family at www.celebrateherlife.com

Catherine Collacott, 95, a longtime resident of Hagerstown, Maryland, died March 8, 2018 at Saint Luke&#8217;s Villa. Born March 15, 1922 in Wilkes Barre, she was a daughter of the late Richard and Honora Healey Horn. A graduate of Meyers... View Obituary & Service Information

The family of Catherine Horn Collacott created this Life Tributes page to make it easy to share your memories.