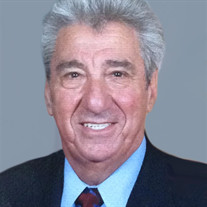 Catal ‘Butters’ Butera, 86, passed away at his home in Wilkes-Barre on Monday, October 3, 2016. Born July 3, 1930 in Pittston he was a son of the late Ignatius and Margaret Aquilina Butera. A 1948 graduate of Pittston High School, Catal served four years in the United States Air Force during the Korean Conflict. Catal worked for Mack Novelty for more than twenty years before starting his own venture, Butera Novelty, which he operated until his retirement. A member of the Parish of Saint Nicholas, he was a former member of the Parish of Saint Therese where he served as an usher and chairman of the bazaar for many years. He was also a member of the Wilkes-Barre Lions Club and Wilkes-Barre Chapter of UNICO. His brothers, Peter and Michael Butera and sister, Mary Wine preceded him in death. Catal will be greatly missed by his wife, the former Mary Ann Czebotar; children, Dr. Peter and his wife Irene Butera of Lewiston, New York, Margaret and her husband Mickey Maley of Wilkes-Barre and Maria and her husband Bob Sullivan of Wilkes-Barre; grandchildren, Jackie and her husband Mike Reilly, James Butera, Jill Maley, Marikate, Maggie, Ben and Luke Sullivan; great-grandson, Madden; brother, Louis and his wife Mary Butera of Dallas; nieces, nephews, other family and friends, especially his best friend, Mary Pat Brunner. Celebration of Catal’s Life will be held Thursday with a Funeral Mass at 10 AM in the Church of Saint Nicholas. Interment will be private. Memorial donations are preferred and may be made to Saint Nicholas - Saint Mary's School or the Parish of Saint Nicholas. Memories and condolences may be shared with Catal’s family at www.lifecelebrations.com

The family of Catal P. Butera created this Life Tributes page to make it easy to share your memories.

Catal ‘Butters’ Butera, 86, passed away at his home in Wilkes-Barre...