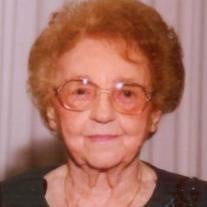 Caroline DelBalso, 97, of Wilkes-Barre peacefully fell asleep in the Lord on Tuesday morning, January 24, 2012 at Wilkes-Barre General Hospital. Born December 28, 1914 in Wilkes-Barre she was a daughter of the late Joseph and Theresa Castrignano Ciavarella. Caroline was educated in Wilkes-Barre city schools. She was married to Daniel DelBalso in 1933 and together they founded D&D Auto Supply in 1940, followed by D&D Motors shortly thereafter. Caroline was a long time member of the Parish of Saint Therese and a member of the Parish of Our Lady of Fatima. She was also active with Christian Women In Gathering. Her husband of sixty years, Daniel DelBalso died January 28, 1994. Sisters, Venus Baratta, Rachael Donnini, Mary Muzzupappa and Emma Starcun, and brothers, Ben and Frank Ciavarella also preceded her in death. Caroline was a loving wife, mother, grandmother, great-grandmother and sister who was committed to her family. She was devoted to her children and grandchildren; giving her love to each one in her own special way. She will be missed by her children, Michael and his wife Mary Ellen DelBalso of Wilkes-Barre, Joseph and his wife Sandy DelBalso of Wilkes-Barre, Daniel and his wife Janet DelBalso of Jenkins Township and Marie and her husband Allan Littzi of Kingston; eleven grandchildren, eighteen great-grandchildren; a sister, Rose Middleton of Florida; nieces, nephews, and cousins. Celebration of Caroline’s Life will be held Friday at 9:30 AM from McLaughlin’s – The Family Funeral Service, 142 South Washington Street in Wilkes-Barre with Funeral Mass at 10:30 AM in the Church of Saint Mary of the Immaculate Conception. Entombment will be in Saint Mary's Mausoleum in Hanover Township. Visitation will be held at McLaughlin's on Thursday from 4 to 8 PM. Memorial donations may be made to St. Jude's Childrens Research Hospital, 501 St. Jude Place, Memphis, TN 38105. Permanent messages and memories can be shared with Caroline’s family at www.celebrateherlife.com

Caroline DelBalso, 97, of Wilkes-Barre peacefully fell asleep in the Lord on Tuesday morning, January 24, 2012 at Wilkes-Barre General Hospital. Born December 28, 1914 in Wilkes-Barre she was a daughter of the late Joseph and Theresa Castrignano... View Obituary & Service Information

The family of Caroline DelBalso created this Life Tributes page to make it easy to share your memories.