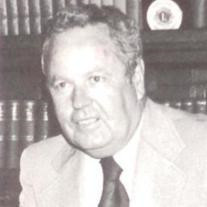 Bernard F. O’Brien, 96, died Sunday, January 30, 2011. Bernie, as he was affectionately known to his family and friends, was born March 5, 1914, a son of Michael and Ellen Rogan O’Brien of the Miners Mills section of Wilkes-Barre. Bernie was married to Agnes McDonnell from the East End section of Wilkes-Barre, and they became the proud parents of ten children. He was left a widower when she died in August of 1958, and had immense pride in his family, as he knew that he raised them on his own. Known as Pop; one of his greatest pleasures was being with all of his children, who are married and living in different areas of the country. But the highlight of his life was being Pop Pop to his twenty-five grandchildren and fifteen great-grandchildren. Mr. O’Brien worked at International Color Printing as a Sterotyper, and served as president of the International Steroptyper’s Union for over twenty-five years. In 1960 he was elected to the Pennsylvania House of Representatives and served nine consecutive terms over eighteen years. During this period, Bernie held numerous key positions in the State House, including: Appropriations Committee; Environmental Quality Board; The House Mines and Energy Management Committee, where he was Majority Chairman from 1975-78; The Democratic Policy Committee; The House and Senate Committee on Three Mile Island; Transportation Committee; The Council of State Government’s Eastern Regional Committee on Energy; and The Governor’s Energy Council. Bernie was active in Wilkes-Barre City affairs and had been deeply involved in its revitalization and restoration following the devastating Agnes Flood of 1972. His seniority and experience in office had produced significant results for the city. Bernie was instrumental in securing the passage of more financial aid to the flood victims, and together with Senator Marin L. Murray, helped secure an emergency appropriation for the construction of a temporary bridge, and eventually get a new North Street bridge erected. Other actions included the development of Parsons Manor on the site of the old Parsons culm bank, where he was involved in creating mine flushing projects to support and strengthen the city’s land surface, and the widening of State Route 115 and the elimination of its fatally dangerous runaway truck hazard. One of his greatest feats was in funding the design and construction of the Cross Valley Expressway. Bernie was a member of the Parish of Holy Saviour and Bishop William J. Hafey Assembly, Fourth Degree, Knights of Columbus Council 302. His favorite hobby and pastime was golf; even with his busy schedule, he was able to find time to play several rounds. He was preceded in death by his wife Agnes; sisters, Mary McKeown and Nancy McGrane; brothers James, Joseph, John, Michael and Edward O’Brien; and his grandson, Jeffrey Hilburt. Bernie will be missed by his children; Patricia Loughran of Cape May, New Jersey, and her daughter Tricia Eakins; John and Gail O’Brien of Beaver Creek, Colorado and their children Erin, Mac, and Conor, Esq. ; Molly and husband Dr. Thomas Rutt, and their children, Thomas, Maura Modrovsky, and Christopher; Eileen and James Halling of Geneva, New York, and their daughter Megan Jacobs; Bernard and Mollie O’Brien of MountainTop and their children Bernard and Lauren Kresge; Daniel and Jane O’Brien of MountainTop and their children Daniel and Corey; Joan and William Hilburt of Harvey’s Lake and their children William and Brian; Kevin O’Brien, Esq. and wife Janet of Centennial, Colorado and their children Molly, Michael, Margaret, and Bridget; Michael and Kim O’Brien of Littleton, Colorado and their children, Sean, William, and Allison; and Agnes Angela and Greg Wolf of Parker, Colorado and their children Brett, Kaitlyn, and Kelly; and his long-time companion and best friend Joan Evans of Wilkes-Barre. The O’Brien family is grateful for the special care that Bernie received from the staff at Smith Health Care in MountainTop. Celebration of Bernie’s Life will be held Saturday at 9 AM at McLaughlin’s Family Funeral Service, 142 South Washington Street in Wilkes-Barre with Funeral Mass at 10 AM in the Church of Holy Saviour. Interment will be in Saint Mary’s Cemetery in Hanover Township. Visitation will be held at McLaughlin’s on Friday from 4 to 8 PM. Memorial donations are preferred and may be made to the Bernard F. O’Brien Scholarship Fund at King’s College, 133 North River Street, Wilkes-Barre, 18711, or Saint Joseph’s Center, 2010 Adams Avenue, Dunmore, 18509-1508 To see Bernie’s Life Story, get directions, leave a message, share memories, photos and more go to www.celebratehislife.com

Bernard F. O’Brien, 96, died Sunday, January 30, 2011. Bernie, as he was affectionately known to his family and friends, was born March 5, 1914, a son of Michael and Ellen Rogan O’Brien of the Miners Mills section of Wilkes-Barre. Bernie... View Obituary & Service Information

The family of Bernard O'Brien created this Life Tributes page to make it easy to share your memories.