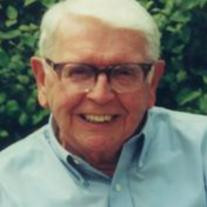 Bernard F. Corbett, 87, of Wilkes-Barre died Friday at Kindred Hospital. Born August 17, 1925 in Wilkes-Barre he was a son of the late John and Lillian Fluegel Corbett. A graduate of G.A.R. Memorial High School, he earned his baccalaureate degree in education as a member of the first graduating class of King's College in 1950. Bernie continued his education at Seton Hall University completing both his MA in personnel and guidance, and doctorate equivalency in administration there. A Navy veteran of World War II he served aboard the USS Manlove Destroyer Escort 36 in the South Pacific. As a professional educator for thirty-two years Bernie spent the majority of his career as an English teacher and guidance counselor at Livingston High School in Livingston, New Jersey. Among his many interests were sports, music and travel. He was an avid golfer and loved playing the game with his wife and friends. Bernie and Delores enjoyed their worldly travels by plane, ship and especially train. Bernie was always a gentleman projecting dignity, class and concern for his fellow man. He enjoyed life and, in his own quiet way, was always there whenever a helping hand was needed. He was a very kind and loving person, and will be missed by all. On July 12, 2012, Bernie and his wife, the former Delores Dalon, celebrated their sixtieth wedding anniversary. A sister, Lillian Charters, brothers, John and Paul Corbett and his beloved Westies; Rascal, Hagen and Bracken preceded him in death. He will be greatly missed by his wife; a son, Brian (Rick) and his wife Diane Morrissey of Wilkes-Barre; grandson, Stephen and his wife Connie Morrissey; great-granddaughters, Grace and Emily; brother-in-law, William and his wife Joan Dalon; many nieces and nephews, including Ernest and his wife Yvonne Siegel, Roberta and her husband Warren Conrad, Gail Charters and James Charters; other family and friends. Celebration of Bernard’s Life will be led by Monsignor Thomas V. Banick on Tuesday at 11 AM at McLaughlin’s – The Family Funeral Service, 142 South Washington Street in Wilkes-Barre. The Rite of Interment and Military Honors will follow at graveside in Oak Lawn Cemetery in Hanover Township. Visitation will be held at McLaughlin's on Tuesday from 10 to 11 AM. Memorial donations are preferred and may be made to SPCA, 524 East Main Street, Wilkes-Barre, 18702-6911 Permanent messages and memories can be shared with Bernard’s family at www.celebratehislife.com

Bernard F. Corbett, 87, of Wilkes-Barre died Friday at Kindred Hospital. Born August 17, 1925 in Wilkes-Barre he was a son of the late John and Lillian Fluegel Corbett. A graduate of G.A.R. Memorial High School, he earned his baccalaureate... View Obituary & Service Information

The family of Bernard Corbett created this Life Tributes page to make it easy to share your memories.