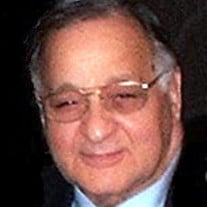 Augustine W. Sergi, 94, of Wilkes-Barre, peacefully passed away in the presence of his loving family on Sunday, May 23, 2021. Born January 23, 1927 in Wilkes-Barre, a son of the late Angelo and Generva DiSpirito Sergi, he was a 1944 graduate of James M. Coughlin High School. Augustine proudly served our country as a Seaman First Class of the United States Navy in the South Pacific during World War II. Augustine had a long career in sales, the majority being in the liquor wholesale industry, which is what he was best known for, until retirement. Even after retirement he later worked in various Pennsylvania's Fine Wine and Good Spirits Stores. Augustine was an ardent member of St. Therese's Church and eventually the Parish of Our Lady of Fatima. He was a former member of B.P.O. Elks Lodge #109 and the Big Band Society. Augustine was an enthusiastic golfer and enjoyed more than fifty years of family vacations to Wildwood Crest. He loved the Yankees and the Eagles, but never their managers or coaches. Augustine is now happily reunited with the love of his life, wife of nearly forty years, and mother of his children, Joan Ann McGlynn Sergi, who died on January 28, 2001. A sister, Carmella Sergi Rauser, and brothers, Vincent and Leo Sergi, also preceded him in death. His son, William Augustine, daughter, Diane Marie, and grandson, William Vincent Sergi, all of Wilkes-Barre, as well as other family and numerous friends will miss him greatly. Augustine's family will celebrate his life at a later date. Share memories and condolences with Augustine's family at www.mjmclaughlin.com

Augustine W. Sergi, 94, of Wilkes-Barre, peacefully passed away in the presence of his loving family on Sunday, May 23, 2021. Born January 23, 1927 in Wilkes-Barre, a son of the late Angelo and Generva DiSpirito Sergi, he was a 1944 graduate... View Obituary & Service Information

The family of Augustine W. Sergi created this Life Tributes page to make it easy to share your memories.