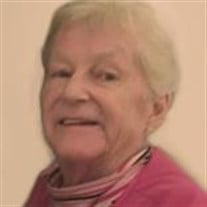 Anna Marie Uzdilla Keefer passed away on July 25, 2017. Anne was born in Wilkes-Barre on August 5, 1937 to Edmond and Anna Uzdilla. Anne graduated at the top of her class from Hanover Memorial High School in 1955. After graduation, Anne became a secretary at the Atwater Company, and later served in various medical and insurance positions at doctor’s offices throughout the region. Anne was a vibrant woman whose intelligence, devotion, and quick wit blessed every person and institution she came in contact with. After marrying Major John J. Keefer at Patuxet River Naval Air Station in 1976, Anne became an invaluable asset to the family business, Keefer’s Army Navy. Her gregarious nature, book-smarts, and confidence quickly translated to business savvy, and bolstered her leadership position in her community. Anne’s strong civic relationships prompted her to join the Wilkes Barre Rotary Club. Always exceptional, Anne was the first woman ever to be inducted into the chapter.  While deftly balancing motherhood and professional life, Anne dedicated her spare time to scholarship interviews, hosting foreign exchange students, and participating wholeheartedly in all facets of Rotary International. Her commitment to the cause was recognized when Anne was awarded the Paul Harris Award, also known as the Service Before Self Award. The next year, Anne was presented with an even more prestigious commendation, the Rotarian of the Year Award, which is given by 45 local clubs to a person who demonstrates exceptional love for community and devotion to international and community service. These awards could have gone to no better person, as Anne was a woman who was happiest serving others. Anne was a devoted wife, mother, sister, grandmother, aunt, community member, and friend. She was the matriarch of her family, beaming with pride when she spoke of the accomplishments of her children and grandchildren. Anne was a woman who exemplified the strength in familial love. Anne was known for admiring the wildlife in the forest outside of her home, for too-tight hugs, for making a mean seafood casserole, and for crafting striking quilt work, which she donated to the Sisters of the Poor, and excitedly gifted to her grateful family. The quilts that Anne lovingly stitched hang in the homes of each member of her family, reminding all of us how blessed we were to have such a generous woman in our lives. Anne was a truly exceptional woman who will be remembered for her devotion to service, community, and family. Anne is survived by her loving husband John “Jake” Keefer, her cherished children Lisa Batka wife of Charles Batka of Barto, PA, and Dr. James Hurley, husband of Billee Hurley of Center Valley, PA. Anne will be dearly missed by her grandchildren, Bridget and Liam Hurley and Charles and Mary Batka as well as her sisters Theresa Kupinewicz and her husband Robert, and Mary Bauer, and her husband Robert. Celebration of Anne’s Life will begin Friday with visitation from 5 to 8 PM at McLaughlin’s, 142 South Washington Street in Wilkes-Barre and continue there on Saturday with gathering at 8:30 AM followed by a Funeral Mass at 9:30 AM in the Church of Saint Mary of the Immaculate Conception. Interment will be in Saint Mary’s Cemetery. Memories and condolences may be shared with Anne’s family at www.celebrateherlife.com

Anna Marie Uzdilla Keefer passed away on July 25, 2017. Anne was born in Wilkes-Barre on August 5, 1937 to Edmond and Anna Uzdilla. Anne graduated at the top of her class from Hanover Memorial High School in 1955. After graduation, Anne became... View Obituary & Service Information

The family of Anna Marie Keefer created this Life Tributes page to make it easy to share your memories.