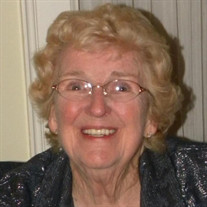 A lifelong educator and an “AUNT” to all her friends and family, Ann M. MacFarland, of Hanover Township, passed away on June 11, 2020, after a short illness. She was 89. Born July 26, 1930 in Avoca she was a daughter of the late Joseph and Pearl Ford MacFarland. Ann earned her bachelor’s degree in education from Misericordia University. She furthered her education at the University of Scranton and graduated with a master’s degree in Elementary Education. A teacher for more than thirty-five years, Ann began her teaching career in Penns Grove, NJ and later moved to the Uniondale School District in Long Island, NY. During that time, Ann formed a lifelong friendship with her colleague, the late infamous Mary Matthews. Ann was an active member of the Altar Rosary Society of St. Robert Bellarmine Parish at St. Aloysius Church. She was a member of the Wyoming Valley Women’s Club and held the title of President from 2004 to 2006, and was Women of the Year in 2007. She received the Alumni Medalion Award in 2001 from Misericordia University. “Aunt Ann,” as she was lovingly known as by all who knew her, was an avid board game lover. She was a worthy opponent in Scrabble, Trivial Pursuit and Family Feud. She also never turned down a game of Dominoes. Despite her love for games and friendly competition, her passion was to be surrounded by family and friends. Her sister, Rose Gaughan, and brother and sister-in-law, Thomas and Mary Louise MacFarland, preceded her in death. Ann will be deeply missed by her loving and caring brother and sister-in-law, James and Joan MacFarland of Yardville, NJ; nieces and nephews, John and his wife Rhonda Gaughan of Gonzalez, LA, Terry and his wife Carol Gaughan of Tucson, AZ, Kathleen Gaughan of Sugarland, TX, Joseph and his wife Shari Gaughan of Denton, TX, Joan Marie and her husband Tom Slater of Hamilton, NJ, Maureen MacFarland-Krainaker and her husband Frank Krainaker of Adamstown, MD, and Thomas MacFarland, Jr. of Kingston, PA; the Caffrey and McGroarty Families of Hanover Twp, PA; many great-nieces and -nephews, and friends, especially her good friend Grace Stachurska. Celebration of Ann’s Life will begin Tuesday, June 16th, with visitation from 6 to 8 PM at McLaughlin’s, 142 South Washington Street in Wilkes-Barre, and continue there on Wednesday with gathering at 10 AM followed by a Funeral Mass at 11 AM in the Church of Saint Aloysius. Graveside services will be in Saint Mary’s Cemetery. Social distancing protocols will be in effect. Memories and condolences may be shared with Ann's family at www.celebrateherlife.com

The family of Ann M. MacFarland created this Life Tributes page to make it easy to share your memories.

A lifelong educator and an “AUNT” to all her friends and family,...