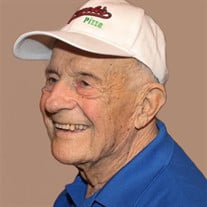 Angelo A. Ricci, 87, passed away peacefully on Wednesday, March 6, 2019. Born March 22, 1931 in Carovilli, Italy he was a son of the late Sabatino and Lucia DiGiacomo Ricci. Angelo emigrated to the United States through Ellis Island and settled in Dorrance with his parents as a small child; the family later moved to Nanticoke. He was the oldest of sixteen children. In 1952 he was married to the love of his life, Bernadine Witczak. Together they raised four children. A proud veteran of the Korean War, Angelo was a Corporal in the United States Army. Angelo was a traveling canvasser for several years before venturing into the pizza business. In 1960 he began operating Anita's Pizza on Hazle Street in Wilkes-Barre and established Angelo's Pizza while moving just a few blocks up the street in 1965: the rest is history. Angelo was a member of the Parish of Saint Leo the Great in Ashley. He was active with the Korean War Veterans of Wyoming Valley, the Sons of Italy and Rainbow Seniors. His brothers, James, Donald and Peter Ricci, and sisters, Mary Brink and Jean Guskiewicz preceded him in death. Angelo will be greatly missed by his wife, Bernadine; children, Angelo, Jr. and his wife Patricia, Carmelina and her husband John Nealon, Jr., Gerry and his wife Melanie, and Deborah and her husband Edward Buratti; grandchildren, Angelo III (Tonya), Angela (John), Kevin (Kristin), Billy (Jennifer), John (Mindy), Andrew (Mollie), Matt (Erin), Deana (Rich), Gerry (Lauren), Brian (Dana), Ryan (Jessica), Jeff (Lindsey); great-grandchildren, Emma, Sophie, Abigail, Angelo IV, Alexis, Keira, Evelyn, Noah, Vincent, Jack, Lillie, Jacob, Fiona, Gavin, Delaney, Addisyn and Austin; brothers, Robert, Louis, John, Anthony and Samuel Ricci; sisters, Lucy Ricci, Eleanor Hamrick, Rose Pelas, Louise Pavone and Antonette Simchick; nieces, nephews, other family and friends. Celebration of Angelo's Life will begin Sunday with visitation from 2 to 5 PM at McLaughlin's, 142 South Washington Street in Wilkes-Barre and continue there on Monday with gathering at 10 AM followed by a Funeral Mass at 11 AM in the Church of Saint Leo. Interment with military honors will be in Holy Trinity Cemetery in Nanticoke. Memorial donations are preferred and may be made to the Church of Saint Leo, 33 Manhattan Street, Ashley, PA 18706, or the Korean War Veterans of Wyoming Valley, PO Box 1571, Kingston, PA 18704. Memories and condolences may be shared with Angelo's family at www.celebratehislife.com

Angelo A. Ricci, 87, passed away peacefully on Wednesday, March 6, 2019. Born March 22, 1931 in Carovilli, Italy he was a son of the late Sabatino and Lucia DiGiacomo Ricci. Angelo emigrated to the United States through Ellis Island and settled... View Obituary & Service Information

The family of Angelo A. Ricci created this Life Tributes page to make it easy to share your memories.

Angelo A. Ricci, 87, passed away peacefully on Wednesday, March...