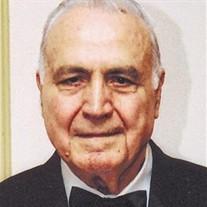 Angelo P. DeCesaris, 88 of Chase Road, Shavertown, passed away Thursday night. Angelo was born May 25, 1927 in Nanticoke to Joseph DeCesaris and Armanda Desculapio DeCesaris. Angelo graduated from King’s College in 1953. Prior to graduation, he served in the United States Marine Corps for 4 years spending a significant amount of time overseas in the Pacific theater of operations; attaining the rank of sergeant. He earned a Master of Arts degree from Catholic University in Washington, D.C. and earned both his Certified Public Accountant (CPA) and Certified Data Processor (CDP) professional credentials. Immediately following graduation from Catholic University, he began teaching accounting at King’s College. During his tenure at King’s, he founded and chaired the Data Processing Department. In addition to teaching, he formed a computer consulting company, which years later became DeCos II Inc. This company provided computer services throughout the state of Pennsylvania. Off campus, Angelo served his profession and his community. He joined the Data Processing Management Association in its founding years and became an instructor of Accounting for the CDP examination. He served on the Resource Allocation Committee of United Way for many years and also served on the Lake-Lehman School Board for six years; two as President . He was a member of St. Therese’s Church, Shavertown. He was preceded in death by his wife, Barbara Ann Behm DeCesaris, daughters Barbara Ann DeCesaris and Donna Marie DeCesaris, his sister Marie Mike and brother Joseph A. DeCesaris. Surviving are sons, Angelo F. and wife Donna, Mark J. and wife Jean, Wayne P. and wife Kim, ten grandchildren and eight great grandchildren. Also surviving are sisters Louise Brader and Elizabeth DeCesaris and numerous nieces and nephews. Visitation will be Monday evening from 6:00 to 9:00 pm at McLaughlin’s, 142 South Washington Street, Wilkes-Barre. A funeral mass will be held at 10:00 am on Tuesday in the Church of Saint Therese, Pioneer Avenue, at Davis Street, Shavertown, Pa. Interment will be in Saint Mary’s Cemetery, Hanover Township. In lieu of flowers, memorial contributions are requested to The Mercy Center, Box 370, Lake Street, Dallas, Pa. 18612 Memories and condolences may be shared with Angelo’s family at www.lifecelebrations.com

Angelo P. DeCesaris, 88 of Chase Road, Shavertown, passed away Thursday night. Angelo was born May 25, 1927 in Nanticoke to Joseph DeCesaris and Armanda Desculapio DeCesaris. Angelo graduated from King&#8217;s College in 1953. Prior to... View Obituary & Service Information

The family of Angelo P. DeCesaris created this Life Tributes page to make it easy to share your memories.